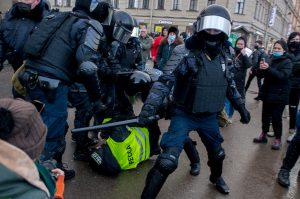 On January 31, mass processions and meetings took place throughout Russia. People of different generations, views and political sympathies came out onto the streets. Among them were those who wanted, primarily, to support Alexei Navalny, and those who came out, first and foremost, against lawlessness and arbitrariness. These people – whatever differences in their views might be – are united by a single civic impulse: they want to preserve their dignity, they want to live and raise children in a state governed by the rule of law, in a just country where the main value is a person. Modern, not backward and archaic politics is based on this value, a living developing society stands on these foundations. The protest was fundamentally peaceful, and proclaimed the rejection of violence, both as practice and as a principle.

However, the authorities responded with blocked cities and brutal force detentions that violate constitutional norms. Even those who did not come outside that day were taken to the police departments. A teacher, founder of the European gymnasium Irina Bogantseva was taken away from home. A 72-year-old chemical scientist with a worldwide reputation, Vyacheslav Lvov, was detained right outside his house. Petersburg film critic Angelica Artyukh was sentenced to 15 days in Moscow for “obstructing traffic”. These are just a few famous names of people respected in society. But about 5.500 ordinary people were detained throughout the country: our compatriots are bullied by the police, beaten, are denied medical assistance. The authorities have declared war on their own people.

The issue of the status of the press is acute in this situation. More than ninety of our fellow journalists, who had their IDs and editorial assignments, were also detained, among them: a member of PEN Moscow Sergey Parkhomenko; journalist Oleg Pshenichny, who eventually received eight days of arrest; photojournalist Ivan Kleimenov, beaten with a stun gun and now arrested for ten days. Even a member of the Presidential Human Rights Council, historian and journalist Nikolai Svanidze ended up in a paddy wagon. On January 31, media representatives were not allowed to fulfill their professional duty, and now those who report the number of protesters, which does not coincide with the official data, are threatened with millions in fines.

All this is evidence of aggression and fear – aggression against peaceful people and fear of letting the nation know the truth about what is happening.

PEN-Moscow and the Free Word Association (Svobodnoye Slovo) are vigorously protesting against yet another attack on civil society and freedom of speech.